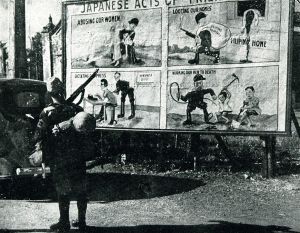 The invasion of the Philippines started on December 8, 1941, ten hours after the attack on Pearl Harbor. As at Pearl Harbor, American aircraft were severely damaged in the initial Japanese attack. Lacking air cover, the American Asiatic Fleet in the Philippines withdrew to Java on December 12, 1941. General Douglas MacArthurescaped Corregidor on the night of March 11, 1942 for Australia, 4,000 km away. The 76,000 starving and sick American and Filipino defenders on Bataan surrendered on April 9, 1942, and were forced to endure the infamous Bataan Death March on which 7,000–10,000 died or were murdered. The 13,000 survivors on Corregidor surrendered on May 6.

Japan occupied the Philippines for over three years, until the surrender of Japan. A highly effective guerilla campaign by Philippine resistance forces controlled sixty percent of the islands, mostly jungle and mountain areas. MacArthur supplied them by submarine, and sent reinforcements and officers. Filipinos remained loyal to the United States, partly because of the American guarantee of independence, and also because the Japanese had pressed large numbers of Filipinos into work details and even put young Filipino women into brothels.[1]

General MacArthur kept his promise to return to the Philippines on October 20, 1944. The landings on the island of Leyte were accomplished by a force of 700 vessels and 174,000 men. Through December 1944, the islands of Leyte and Mindoro were cleared of Japanese soldiers. During the campaign, the Imperial Japanese Army conducted a suicidal defense of the islands. Cities such as Manila were reduced to rubble. Between 500,000 and 1,000,000 Filipinos died during the occupation. 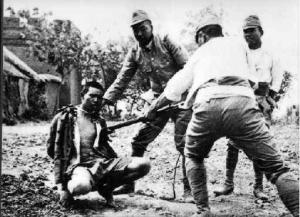 Japan launched an attack on the Philippines on December 8, 1941, just ten hours after their attack on Pearl Harbor.[2] Initial aerial bombardment was followed by landings of ground troops both north and south ofManila.[3] The defending Philippine and United States troops were under the command of General Douglas MacArthur, who had been recalled to active duty in the United States Army earlier in the year and was designated commander of the United States Armed Forces in the Asia–Pacific region.[4] The aircraft of his command were destroyed; the naval forces were ordered to leave; and because of the circumstances in the Pacific region, reinforcement and resupply of his ground forces were impossible.[5] Under the pressure of superior numbers, the defending forces withdrew to the Bataan Peninsula and to the island of Corregidor at the entrance to Manila Bay.[6] Manila, declared an open city to prevent its destruction,[7] was occupied by the Japanese on January 2, 1942.[8]

The Philippine defense continued until the final surrender of U.S.-Philippine forces on the Bataan Peninsula in April 1942 and on Corregidor in May.[9] Most of the 80,000 prisoners of war captured by the Japanese at Bataan were forced to undertake the infamous “Bataan Death March” to a prison camp 105 kilometers to the north.[9] Thousands of men, weakened by disease and malnutrition and treated harshly by their captors, died before reaching their destination.[10] Quezon and Osmeña had accompanied the troops to Corregidor and later left for the United States, where they set up a government-in-exile.[11] MacArthur was ordered to Australia, where he started to plan for a return to the Philippines.[12]

The Japanese military authorities immediately began organizing a new government structure in the Philippines. Although the Japanese had promised independence for the islands after occupation, they initially organized a Council of State through which they directed civil affairs until October 1943, when they declared the Philippines an independent republic.[13] Most of the Philippine elite, with a few notable exceptions, served under the Japanese.[14] The puppet republic was headed by President José P. Laurel.[15] Philippine collaboration in puppet government began under Jorge B. Vargas, who was originally appointed by Quezon as the mayor of Greater Manila before Quezon departed Manila.[16] The only political party allowed during the occupation was the Japanese-organizedKALIBAPI.[17] During the occupation, most Filipinos remained loyal to the United States,[18] and war crimes committed by forces of the Empire of Japan against surrendered Allied forces,[19] and civilians were documented.[20][21]

Japanese occupation of the Philippines was opposed by active and successful underground and guerrilla activity that increased over the years which eventually covered a large portion of the country. Opposing these guerrillas were a Japanese-formed Bureau of Constabulary (later taking the name of the old Constabulary during the Second Republic),[22][23] Kempeitai,[22] and the Makapili.[24]Postwar investigations showed that about 260,000 people were in guerrilla organizations and that members of the anti-Japaneseunderground were even more numerous. Such was their effectiveness that by the end of the war, Japan controlled only twelve of the forty-eight provinces.[25]

The Philippine guerrilla movement continued to grow, in spite of Japanese campaigns against them. Throughout Luzon and the southern islands, Filipinos joined various groups and vowed to fight the Japanese. The commanders of these groups made contactwith one another, argued about who was in charge of what territory, and began to formulate plans to assist the return of American forces to the islands. They gathered important intelligence information and smuggled it out to the U.S. Army, a process that sometimes took months. General MacArthur formed a clandestine operation to support the guerrillas. He had Lieutenant Commander Charles “Chick” Parsons smuggle guns, radios and supplies to them by submarine. The guerrilla forces, in turn, built up their stashes of arms and explosives and made plans to assist MacArthur’s invasion by sabotaging Japanese communications lines and attacking Japanese forces from the rear.[26]

Various guerrilla forces formed throughout the archipelago, ranging from groups of U.S. Army Forces Far East (USAFFE) forces who refused to surrender to local militia initially organized to combat banditry brought about by disorder caused by the invasion.[27] Several islands in the Visayas region had guerrilla forces led by Filipino officers, such as Colonel Macario Peralta in Panay,[27][28] Major Ismael Ingeniero in Bohol,[27][29] and Captain Salvador Abcede in Negros.[27][30] The island of Mindanao, being farthest from the center of Japanese occupation, had 38,000 guerrillas who were eventually consolidated under the command of American civil engineer ColonelWendell Fertig.[27]

One resistance group in the Central Luzon area was known as the Hukbalahap (Hukbo ng Bayan Laban sa Hapon), or the People’s Anti-Japanese Army, organized in early 1942 under the leadership of Luis Taruc, a communist party member since 1939. The Huks armed some 30,000 people and extended their control over portions of Luzon.[31] However, guerrilla activities on Luzon were hampered due to the heavy Japanese presence and infighting between the various groups,[32] including Hukbalahap troops attacking American-led guerrilla units.[33][34]

Lack of equipment, difficult terrain and undeveloped infrastructure made coordination of these groups nearly impossible, and for several months in 1942, all contact was lost with Philippine resistance forces. Communications were restored in November 1942 when the reformed Philippine 61st Division on Panay island, led by Colonel Macario Peralta, was able to establish radio contact with the USAFFE command in Australia. This enabled the forwarding of intelligence regarding Japanese forces in the Philippines to SWPAcommand, as well as consolidating the once sporadic guerrilla activities and allowing the guerrillas to help in the war effort.[27]

Increasing amounts of supplies and radios were delivered by submarine to aid the guerrilla effort. By the time of the Leyte invasion, four submarines were dedicated exclusively to the delivery of supplies.[27]

Other guerrilla units were attached to the SWPA, and were active throughout the archipelago. Some of these units were organized or directly connected to pre-surrender units ordered to mount guerrilla actions. An example of this was Troop C, 26th Cavalry.[35][36][37] Other guerrilla units were made up of former Philippine Army and Philippine Scouts soldiers who had been released from POW camps by the Japanese.[38][39] Others were combined units of Americans, military and civilian, who had never surrendered or had escaped after surrendering, and Filipinos, Christians and Moros, who had initially formed their own small units. Colonel Wendell Fertig organized such a group on Mindanao that not only effectively resisted the Japanese, but formed a complete government that often operated in the open throughout the island. Some guerrilla units would later be assisted by American submarines which delivered supplies,[40] evacuate refugees and injured,[41] as well as inserted individuals and whole units,[42] such as the 5217th Reconnaissance Battalion,[43] and Alamo Scouts.[43]

By the end of the war, some 277 separate guerrilla units, made up of some 260,715 individuals, fought in the resistance movement.[44] Select units of the resistance would go on to be reorganized and equipped as units of the Philippine Army and Constabulary.[45]

End of the occupation 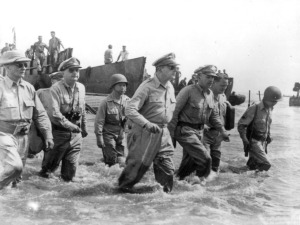 When General MacArthur returned to the Philippines with his army in late 1944, he was well supplied with information; it is said that by the time MacArthur returned, he knew what every Japanese lieutenant ate for breakfast and where he had his hair cut. But the return was not easy. TheJapanese Imperial General Staff decided to make the Philippines their final line of defense, and to stop the American advance toward Japan. They sent every available soldier, airplane, and naval vessel to the defense of the Philippines. The Kamikaze corps was created specifically to defend the Philippines. The Battle of Leyte Gulf ended in disaster for the Japanese and was the biggest naval battle of World War II. The campaign to re-take the Philippines was the bloodiest campaign of the Pacific War. Intelligence information gathered by the guerrillas averted a disaster—they revealed the plans of Japanese General Yamashita to trap MacArthur’s army, and they led the liberating soldiers to the Japanese fortifications.[26]

MacArthur’s Allied forces landed on the island of Leyte on October 20, 1944, accompanied by Osmeña, who had succeeded to the commonwealth presidency upon the death of Quezon on August 1, 1944. Landings then followed on the island of Mindoro and aroundLingayen Gulf on the west side of Luzon, and the push toward Manila was initiated. The Commonwealth of the Philippines was restored. Fighting was fierce, particularly in the mountains of northern Luzon, where Japanese troops had retreated, and in Manila, where they put up a last-ditch resistance. The Philippine Commonwealth troops and the recognized guerrilla fighter units rose up everywhere for the final offensive.[137] Filipino guerrillas also played a large role during the liberation. One guerrilla unit came to substitute for a regularly constituted American division, and other guerrilla forces of battalion and regimental size supplemented the efforts of the U.S. Army units. Moreover, the loyal and willing Filipino population immeasurably eased the problems of supply, construction and civil administration and furthermore eased the task of Allied forces in recapturing the country.[138][139]

Fighting continued until Japan’s formal surrender on September 2, 1945. The Philippines had suffered great loss of life and tremendous physical destruction by the time the war was over. An estimated one million Filipinos had been killed from all causes; of these 131,028 were listed as killed in seventy-two war crime events.[140] U.S. casualties were 10,380 dead and 36,550 wounded; Japanese dead were 255,795.[140]